You’ve screwed up at work. What do you do?

1. Hide it.
2. Lose sleep.
3. Worry constantly about being found out.
4. Create a plausible excuse in case someone rats you out.
5. Avoid blame at all costs.
6. Tell your supervisor what you did and offer to make it right.

A sincere apology is the Swiss Army knife of the human behavior wilderness.

It can mend rifts, heal wounds, and repair damage inflicted on a material object, a reputation, or a relationship. So why do so many people seem to resist apologizing?

If you feel a little squeamish about apologizing to a boss, coworker or client, take heart. You are not alone. Many of us were brought up to believe that saying you’re sorry is a sign of weakness or an admission of guilt.

But it’s only human to feel bad about making a mistake that causes harm to another. And as it turns out, a sincere apology can heal. Medical schools now teach new doctors how to admit medical errors and express their sorrow and regret. The practice is not only beneficial for physicians to show their human side, but it’s also thought to reduce the number of malpractice lawsuits.

On the flip side, let’s look at the handiwork of someone who refuses to apologize.

During my tenure as a communications executive, a much-beloved CEO retired and was replaced by a hotshot “gunslinger.” On the new CEO’s first day, he called a meeting with the executive leadership team. Looking around the room of several dozen people, he then singled me out. “Why haven’t I been interviewed by the New York Times yet?” he demanded, and proceeded to make an example of my failure to intuit what he wanted.

I was stunned. It was his first day! And though I’d been working for weeks on internal communications about his arrival, he’d never mentioned the Times. Humiliated, I stammered something about getting on that right away. My colleagues all started looking at their shoes. Later several came by to express sympathy for the thrashing I’d endured from the new CEO—who, of course, never apologized. A culture of fear was instilled that day, and company morale declined as employees divided into camps, either kissing up to, or resisting, the new tyrant.

A leader who is incapable of admitting when she’s wrong has got it—well, all wrong. She is likely to be viewed as rigid, arrogant and insecure. Her lack of compassion and empathy can raise doubts about her fitness for leadership, and she will have a devil of a time creating a cohesive team.

It’s safe to say that knowing how to apologize well is a key strength. I’ll relate another story from my former corporate life.

The power of admitting when you’re wrong

A guy I’ll call Roy worked in the accounting department of my organization. Roy seemed to really enjoy jerking my chain. He routinely withheld information, taking forever to provide numbers I needed and waiting until my third or fourth email before replying. The showdown came one day when I needed some data to complete a report that was due on the CEO’s desk the next day. Roy informed me I would have to wait a week. I’d had enough. Through clenched teeth, I said, “I’d hate to have to tell the CEO that his proposal got stalled on your desk.” The next morning I had no report from Roy, but I did have something else: a note from human resources.

Apparently in HR-speak, my remark was viewed as a threat, a huge workplace no-no. I had thrown around the weight of my position to imply consequences beyond my authority, which was tantamount to harassment. The HR director strongly suggested an apology to Roy would help me avoid any “unintended consequences.”

Deeply humbled, I knew the HR director was right. I had brought the trouble on myself when, in my frustration, I’d hinted that Roy’s job was in jeopardy if he didn’t do what I asked and make it snappy. I swallowed my pride and went to Roy’s cubicle. I apologized for misusing my position to manipulate him and showed my appreciation for the thankless job he did every day. “I know you have a lot of conflicting priorities, and I was just trying to muscle my way to the top of the pile,” I said. “It won’t happen again.”

I held my breath, and stole a glance at Roy. He was staring at me in astonishment. The report was on my desk that afternoon, and ever afterward he was unfailingly pleasant and cooperative. That’s one of the magical things that can happen when you apologize. It’s a paradoxical superpower.

The report was on my desk that afternoon, and ever afterward he was unfailingly pleasant and cooperative.

If a humble apology can have that much impact on just one conflict, imagine the effect it can have on you and your workplace—not just with supervisors and direct reports, but also the clients or customers you serve. Imagine being able to walk a little taller, with a little more confidence and integrity.

When we’re not shrinking in fear of our own human fallibility, when we’re unafraid of taking responsibility for our misses as well as our hits, we start behaving like a leader, someone who’s trustworthy, decent and fully invested in the organization. Who knows? We might even start to love our job again. 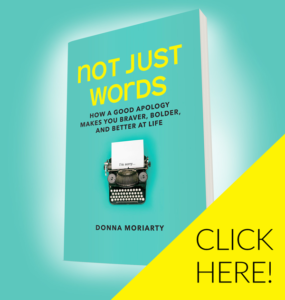 Career Contessa: How to Stop Apologizing at Work (+ What to Say Instead)

Dr. Laura: 3 Pitfalls To Avoid When Apologizing To Your Child
Scroll to top